Find an implement dealer near you:

A backhoe implement mounts to the rear of the tractor and is primarily used for digging. It can also be used for small-scale grading and moving dirt. Although it isn’t as versatile as other types of implements, it is a very powerful tool for digging.

A box blade can be used for grading and leveling, spreading dirt, creating paths, smoothing dirt, and more. It uses scarifiers to break up packed dirt before the box pushes it forward. Overall, a box blade comes in great handy for leveling areas and moving dirt.

FAQ: “Can you plow snow with a box blade?“

A cultipacker is used to prepare a firm and consistent seedbed by breaking up dirt clods, removing crevices, and eliminating air pockets. After using a cultipacker, you’ll have a smooth, firm surface with small grooves. A cultipacker is used for the final preparation of a seedbed, then used again after seeding. 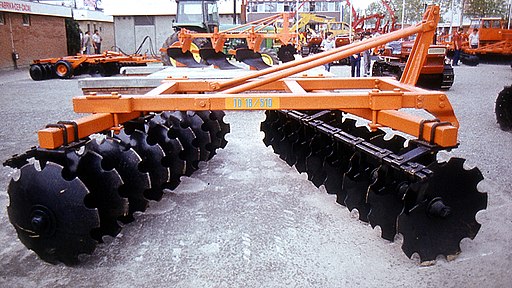 FAQ: “How fast should you pull a disc harrow?“

FAQ: “How do you use a front-end loader on a tractor?“

Grain carts, also known as chaser bins, are most commonly used during combine harvesting to collect and transport grain. A grain cart is pulled by a tractor and prevents the combine from needing to stop to unload.

A gravity wagon, also referred to as a gravity box, is a wagon that can be used to transport grain and other bulk items. It is called a “gravity” wagon because it uses the power of gravity to unload. 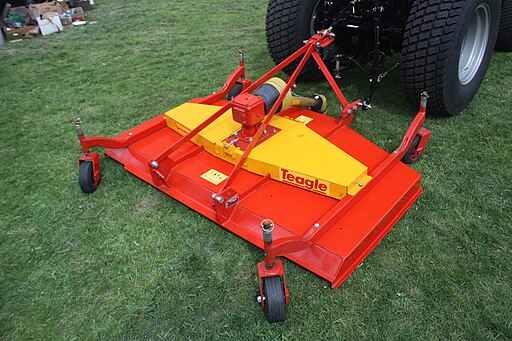 A grooming mower, also referred to as a finishing mower, is used for the large-scale mowing of grass. Unlike the rotary cutter, it is designed to leave a clean, short grass surface in its path. Grooming mowers should be used on the grassy areas of your property that you want to look the best.

FAQ: “What’s the difference between a finishing mower and a rotary cutter?“

A hay bale wrapper is used to wrap bales of hay in plastic.

A hay baler is used to collect cut crops and pack them into square or round bales. They are used after creating a windrow using a hay rake. Balers come in various sizes along with the shape. 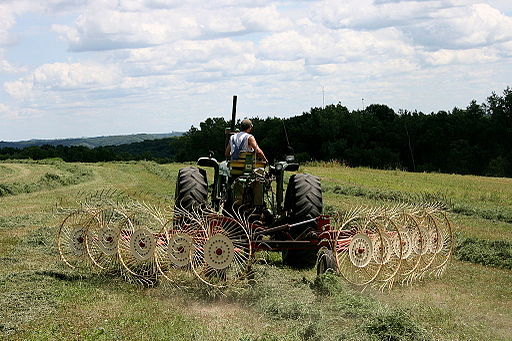 A hay rake is used to arrange hay into windrows in preparation for baling. It can also be used to flip over wet hay to speed up the drying process. Hay rakes come in multiple variations depending on your needs.

Tractor forks can be attached directly onto a bucket or installed to replace the bucket entirely. Forks are very handy and have a wide variety of uses, including moving loaded pallets (obviously), transporting pipes and other long objects, moving hay bales, clearing tree branches, and much more. The uses for tractor pallet forks are virtually endless. 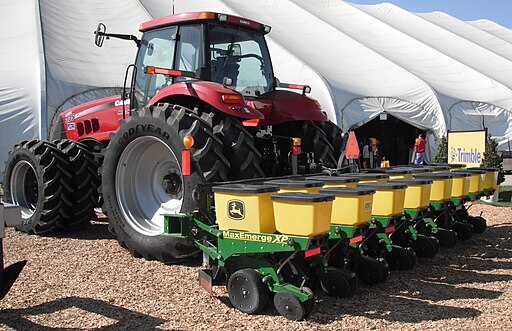 A planter attachment is used to plant rows of seeds in a field. It can be towed behind a tractor or mounted directly. There are many different designs and variations of planters depending upon your needs.

A plow is used to dig deep and turn over the soil to prepare for the planting of a crop. The plow will prepare the surface by getting rid of weeds and other plant material.

A post hole digger implement can be used to easily dig post holes using the power of your tractor. Although this may not be needed by everyone, it is worth the investment if you find yourself needing to dig post holes often.

FAQ: “How do you attach a post hole digger to a tractor?“

A rear blade is attached to the back of a tractor and has many uses, including grading, leveling, moving gravel, snow removal, and much more! It is a very useful and versatile tractor attachment.

A rotary cutter, also known as a “brush/bush hog,” is best for cutting rough and thick areas. Rotary cutters are not intended to be used to cut typical grass lawns (see grooming mowers) but are rather designed to chop through tough plant material.

FAQ: “Is a rotary cutter the same as a brush hog?“ 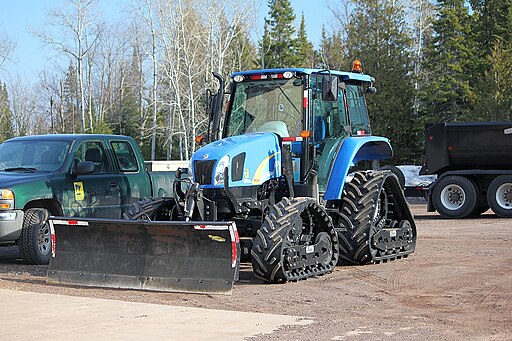 A snow blower or blade implement is used to clear and move snow from paths, roads, driveways, and more. They are extremely useful and will save you time if you experience heavy snow in the winter.

A sprayer is used to spread different types of liquid, such as pesticides and fertilizers, across a field. Sprayers come in a multitude of sizes and designs to accommodate different needs. Some sprayers are towed behind the tractor while others are attached to a 3-point hitch.

A spreader can be used to spread fertilizers, seed, lime, road salt, and other materials. They can be constructed out of different materials, such as polyethylene and steel, and have other features depending on the application.